Delayed onset muscle soreness, or DOMS, is the bane of every newbie lifter. It’s that feeling you get hours or days after a hard workout and it’s often at its worst for those who are just getting started. It’s caused by micro-trauma to the muscles and even advanced lifters will have to deal with it once in a while.

Fortunately, you can alleviate it a great deal if you’re willing to take certain actions. Let’s look at some effective ways to reduce the effect of DOMS.

Contrast showers are a post-workout treatment that many athletes have found to be helpful. Even science has gotten on board, rating it as more effective than passive recovery in the aftermath of a workout.

Contrast showers are the easiest form of contrasting water therapy for most people to use. When you take a shower after your workout all you need to do is run hot water for 90 seconds, followed by 30 seconds of cold water.

It can be a bit disconcerting at first but once you get used to it you’ll find that it’s a great way to help with post-workout recovery.

Foam rolling comes highly recommended for those looking to reduce the effect of DOMS. Using a high-density foam roller seems to decrease recovery time by a large amount and it’s no reason that many people swear by it.

While most commonly used post-leg-day you can get creative with it pretty easy to allow yourself to recover from most major compound exercises. The pectorals and deltoids come to mind as particularly easy to treat with foam rolling.

The study showed that there’s a correlation between foam rolling and decreased pain on the next day, but it also showed that in cases where the individual continued to do 20 minutes of foam rolling per day that the benefits continued.

While some people swear they’re fine going in cold, there’s a body of evidence that shows that properly warming up and stretching before a workout will decrease the amount of post-workout pain.

While cooling down after exercise seemed to have some effect it paled in comparison to the warm-up.

For most people 20 minutes of cardio before working out will be enough to help reduce the soreness caused by DOMS. Stretching the major muscle groups involved in an exercise shows more effect but the end result is increased twofold if the stretching occurred after the workout.

The end result: warming up and stretching can help but they shouldn’t be the only things you rely on.

While there’s always going to be some temptation to just stay in bed after a serious case of soreness hits, that’s exactly the opposite of what you should be doing. In order to counteract soreness, it’s important to make sure that you keep moving.

That doesn’t mean you need to work out the same muscles the next day, especially if we’re talking about resistance training, but light calisthenics or cardio can help you recover more quickly.

It keeps the blood flowing, essentially, which is a good thing when it comes to your muscles recovering more quickly from the microtrauma that causes DOMS.

To recover quickly, you also need to make sure that you’re getting the right nutrients for your body to repair itself.

In general, that means eating healthy in the first place, but the particular nutrients to look for in order to recover more quickly are the following:

If the above look similar to what you’re already eating… great! Just add in a little bit more protein than you normally would.

Oddly enough, caffeine is also an excellent way to relieve post-workout pain. So, for you coffee lovers out there, drink up after your workout to help reduce the pain of delayed onset muscle soreness.

6. Take a Hot Bath After Your Session…

If you’re not up for a contrast shower, you may be up for a hot bath.

It turns out that immersion in hot water is surprisingly effective at combatting pain and soreness in cases of DOMS and injury.

The key is to make sure that it’s not super hot but definitely hot enough to draw the blood to the skin. It’s relaxing as well, if you needed a bonus reason to slip yourself into a hot bath after a hard workout.

If you can stand it, then you might be surprised to find out that an ice bath is actually one of the most effective ways to prevent and combat DOMS.

It’s a bit much for most people, but for newbies and those who just had an extra hard session they can be the difference between laying in bed groaning and walking around just fine.

It’s probably the hardest on our list, but it’s also extremely effective.

You don’t have to suffer from extreme cases of DOMS. Instead, use your time before and after the workout wisely so that you can both prepare and get a head start on muscle soreness before it begins to pain you.

It’s not always easy, but the results will be well worth it if you’ve found yourself struggling to get through the day after an exceptionally hard workout. It’s just about finding which strategy works the best for your body.

So, why not make a plan and start getting prepared now? 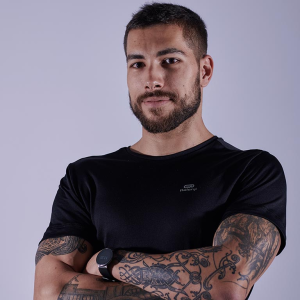 George is a fitness fanatic, certified personal trainer and arm wrestling champion. When he is not in the gym, you can find him rescuing stray kittens and entering cosplay competitions.